While the plumbers were excavating the septic tank in the front yard, they heard a commotion and got my attention.

They lifted the lid and there before us, a whole family of sock puppets were living inside, explaining years and years of single socks disappearing from the clothes washing machine.

A few of my wife’s decorative leggings were used by the sock puppets as a bed.

Two pairs of tights covered the bed to keep condensation from dripping down on the comfy puppets.

Kathryn and Lee looked into each other’s eyes.

He widen his eyelids, taking in her eyebrows, nose, cheeks, hair and her lips, the lower lip turned out slightly, just short of a frown.

Her warm hand clasped in his, he took a small sideways step, his heel striking the ground.

As he raised his foot for the next step, Neill called out.

“No! No! No! Land on your toes! Or, if you’re going to land on your heel, which you always seem to do, turn your foot around so it appears you landed on your toes and spun around.”

Kathryn smiled, shrugged her shoulders and waited for Lee to begin again.

One, two, three, one footfall after another landed perfectly with the triplet.

Lee nodded at Neill in thanks.

Kathryn opened her mouth to speak, her eyebrows raised in anticipation of saying something and then stopped.  She dropped her shoulders and relaxed her right hand in Lee’s left.

Lee, feeling the change in Kathryn’s grip, led Kathryn back to the starting position.

She looked at him in a way that made Lee feel he was completely in charge, a physical surrendering like an infant that’s completely comfortable bouncing in a babushka tied around a mother’s neck as she runs down the street to meet her husband coming back from the battlefront.

The two dancers held their heads high and repeated the first triplet, Lee holding Kathryn’s hand such that, with their elbows bent, they formed a small “W” in the air.

Kathryn looked down at their position.

“I need your body closer to mine, like this.”  She pulled Lee’s left hand down by her right side and slightly behind her.

“Exactly.”  She smiled at his throat and then looked up at him.

Kathryn’s innocent look revealed her true desire, to get Lee to learn how to dance.

More than anything, she wanted him in control of his partner on the dance floor, their motions in sync, their moves as one, in the same way that Shannon, an interpretive dancer, used a shawl and ballet moves to imply the simple peasant Mary one moment and, leaping into the air, falling into a crouch with a twist of the cloth, the Virgin Mother Mary holding a babe in swaddling clothes the next moment.

Lee took one step sideways, his body rotating, pulling Kathryn closer as he took the second and third steps until he held her pressed close to him.

Neill clapped his hands.  “Wonderful!  We’re ready for the next set of steps.  Lee, now that you’re facing your partner, I want you to complete a ‘walk-walk-walk.'”

As Lee completed the moves in slow motion, left toes tucked behind right heel three times in a row, Kathryn held her gaze, as if she was willing Lee to become a strong-willed man.

All Lee had to do was let go.

Accept his rightful place as heir to an imaginary throne.

He performed the steps awkwardly, his left arm strong when it should have been loose and his right hand held slightly loose under Kathryn’s armpit, careful not to squeeze too tightly.

As if reading his thoughts, Kathryn smiled and, with a tiny raising of her left shoulder, indicated to Lee that he should hold her closer with his left hand on her back.

Lee and Kathryn returned to their original dance position and completed the maneuvers flawlessly, Lee absolutely relaxed, his gaze into Kathryn’s eyes removing the foggy illusion of Kathryn as “Kathryn the dance instructor/partner” and opening Lee up to a view of her as someone else.

Was Lee removing one of his masks or peeling back one of hers?

Kathryn kept looking at him, her lips together, her thoughts invisible to Lee.

For the next three or four repetitions, Lee was lost in his thoughts.

He looked at Kathryn’s jawline, the colour of her skin, her hair, her dress, her dancer’s stance.

He tried to imagine the once heavier woman before him, what she was like 75 pounds ago.

She’s certainly smart, or so she seemed.  He had carried on no deep, meaningful conversation with her about Fermat’s last theorem or the largest known irrational number but he believed her when she said she was a mathematician in training to become a horse breeder.

Lee knew he was gullible about a lot of things.

His employees had told him many times over that he accepted every excuse they gave him about coming in to work late but they never noticed that he always got them to complete their assignments ahead of time.

Gullibility as a ploy has its pluses, just like women who feign ignorance to boost men’s fragile egos.

Neill patted Lee’s shoulder.  “Great job tonight!  That’s all for now.  Why don’t you practice what you learned and we’ll go on to the next set of steps later?”

Lee bowed his head toward Kathryn and dropped his right arm.

She curtsied and let go of his left hand, turning to another instructor to talk about an upcoming holiday dance party at the Flying Monkey Arts Centre.

Designers at the Milan Fashion Week runway shows begged customers to buy their clothes in an effort to support anorexia — the Anorexia Automaton Army is about to take over the world with your help: 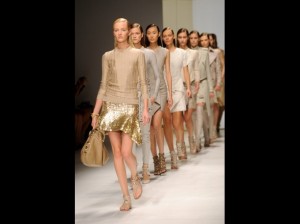 Meanwhile, mobile phones are eating us for lunch but keeping us from being bored at the same time.  Go figure!

It’s probably the same reason our antiquated telecom system means that as more and more Americans seek citizenship abroad, we had better start to speak Chinese if we’re going to understand what the majority of Internet citizens are gossiping to each other in their costly relief of boredom.

My mother ended up getting an Emerson 39-inch LCD TV from Walmart — now waiting for friends/neighbours to install it.

Let’s back up — my mother’s email on Friday:

I know there is a difference of price between the two, but I just don’t know what to do right now.  Any ideas? Dad and I used to make decisions like this together. I guess I just don’t feel as comfortable as I should about things like this.  I do know Dad did not have much confidence in Best Buy.

I shopped at Walmart this afternoon with my wife and saw that, in addition to the 37″ Vizio, there was a 39″ Emerson for $328 with three font sizes for closed captioning.  The employees in the electronics department, Dan and Karen, were very helpful.

I told my mother about the Emerson TV after she had emailed me her concerns.

She drove to her hometown Walmart and closed the deal.

She finally emailed, “The sales-person said if it didn’t fit, I could bring it back within 90 days for a full return.”

Could Best Buy top that, or do they still charge a restocking fee?

While cleaning out my father’s closet — clawing through his hidden stash of Viagra, box of .22 long rifle bullets of mine from my Boy Scout days, stack of Playboys, old Avon cologne bottles, ziplock baggie of .38 hollow tip bullets, Optimist Club pins, German spy camera, fedora hats from the 1930s/1940s, ties, and other stuff I’ll catalog one day — I found the following:

Picture and role of one of my mother’s early classrooms 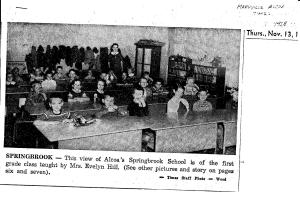 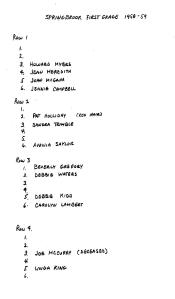 Fez for Jericho Temple, as well as this book:

When I get my camera out, I’ll share pictures of an album my father had hidden at the top of the closet, right next to his Viagra stash: The Battle of Sex by Redd Foxx and Hattie Noel.  Partial scan below:

No photography allowed at the show last night so you’ll have to feast your eyes on these beauties, instead: 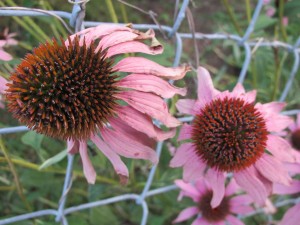 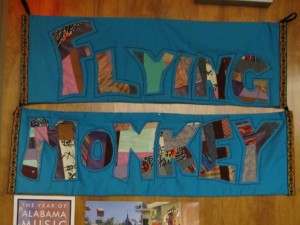 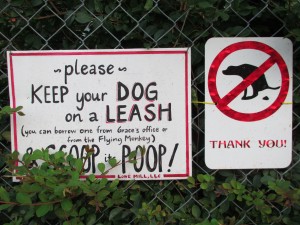 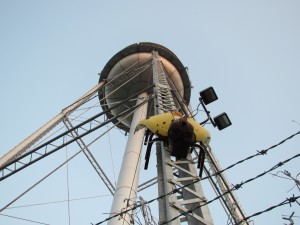 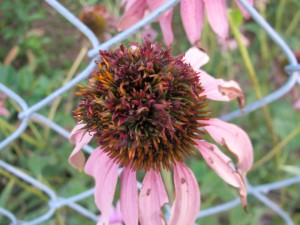 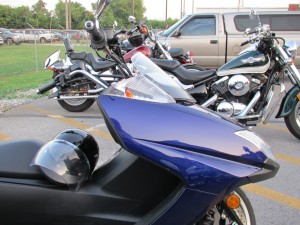 Before the days of manpurses, men carried hunks of leather which encased identification cards, family photos and whatnot, giving men backaches when they sat too long with the leather hump pushing up one side of their rumps.

Here are some of the miscellaneous items in two wallets found in my father’s computer desk — my father’s wallet and my grandfather’s (Dad’s father’s) wallet — a snapshot of history (you can decide which set(s) of images belonged to which wallet): 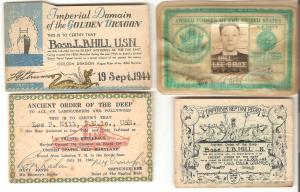 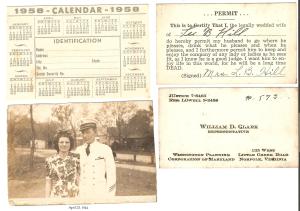 Another image from the paternal archives… 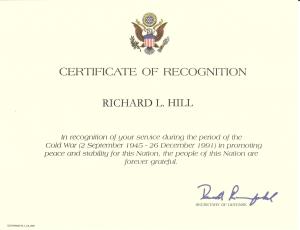 And for those special blog readers (you know who you are), a bonus, including images from my mother’s fashionable hair days… 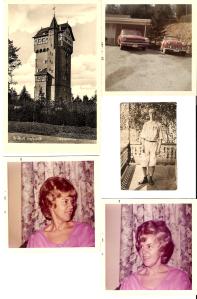 Your bonus for the day: Parents, make time in your busy lives for your kids’ education.

And one for the road (to the nonvegans out there): Animal protein for the lean, mean machine in you…