Do you listen to the sounds of [nonhuman] nature around you?

This morning, whilst eating oatmeal outside, I heard the alarm chirps of woodpeckers nearby, accompanied by the buzz of a chainsaw.

I looked around and could not find the source of the woodcutting sound, at first.

Finally, after using my pocket camera as a spyglass, I spotted the treehugging, limbclimbing, chainsaw-wielding giant slayer nextdoor: 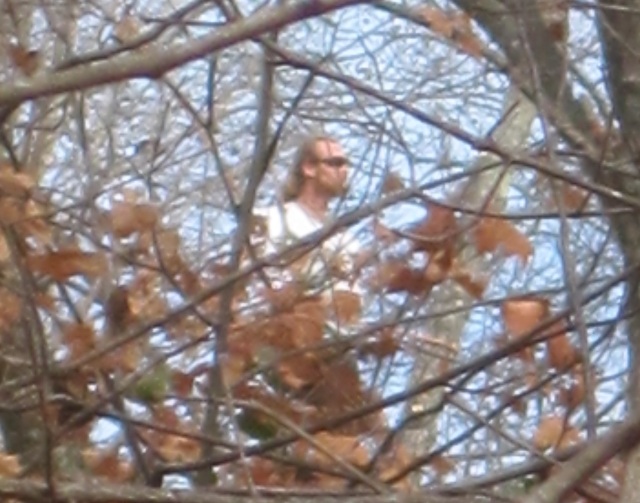 I accept that my new nextdoor neighbours are responsible owners of a patch of woods in which a small house, driveway and septic field line sit.

If I was a more responsible homeowner, there wouldn’t be holes in the eaves, bats in the belfry and mice in the crawlspace.

Or is that my head I’m talking about?

Anyway, here’s the word redefinition of the day:

Civilisation — what extra children who are not needed to grow/raise food build to overcome boredom and justify their existence when predators are no longer a balancing threat; deadend offshoots of evolution; entropy states in flux.

My friends in the archaeological business found a scrap of writing that had been stuck on the bottom of the foot of a mummified person who drowned in the Dead Sea.  Apparently, it clarifies the controversy surrounding the alleged age of Methuselah, said to have lived to 969 years of age.

Translation of the scrap of writing indicates that Methuselah actually lived 96 years and 9 months (or moons).

Young Earth proponents have seized on this last bit of data as evidence for a firm foundation in their beliefs that our planet is only thousands of years old.

Meanwhile, treasure seekers have begun a fullscale dredging of the Dead Sea for more fool’s gold in the form of the last civilisation’s toss-offs, trash dumps or other forgotten piles of detritus that antiquity collectors will pay top dollar in order to make connections between previous scraps that are practically senseless but cost too much to say they’re worthless.